Substitution of PGMs is part of the EU's Raw Materials Strategy to reduce the use of these precious metals as critical raw materials. However, substitution needs to be considered carefully on a case-by-case basis and also targeted appropriately towards selected applications. For some applications it may be possible to reduce the use of a particular material or to replace it completely. However, the use of a particular critical material can confer exceptional performance that may justify the associated supply risks and additional costs incurred.

In two applications with a high reliance on PGMs, catalytic converters and fuel cells, industrial end-users tried to reduce and minimise the use of platinum due to the high relative price of the metal. With regard to automotive emission control catalysts, the findings of several years of research and substantial investments from industry as well as from the public sector over the course of the past 50 years made it clear that PGMs can currently not be substituted without a loss of performance and increased cost. The current technology, a heterogeneous catalytic function containing PGMs based upon a monolithic substrate body, has proven it's robustness with practically no recalls over the whole period of mass serial application. 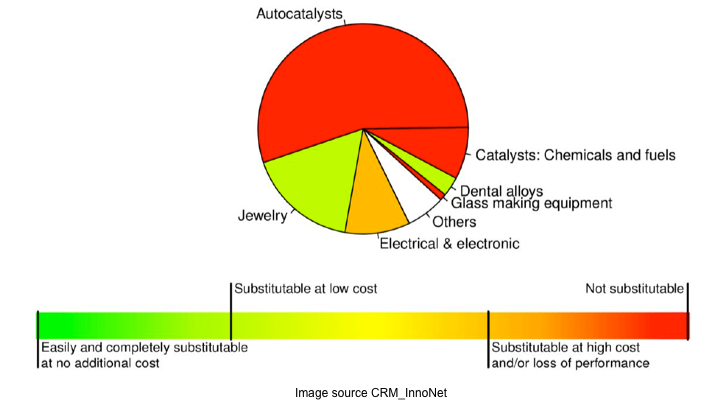 There is already a suitable alternative to substitution, so called "thrifting" which is a worldwide trend of decreasing the PGM loading in car catalysts, fuel cells and industrial components.

For example, the amount of platinum in fuel cells has decreased by around 80% during the past decade: Several car producers have reduced platinum loadings in their fuel cells to around 30 grams which is only around four to five times more than current light-duty diesel catalysts fitted to equivalent class cars in Europe. This trend is expected to continue, albeit at a reduced rate with smaller incremental improvements.

Thrifting" of a material type can be a viable strategy for reducing material content, whilst maintaining the inherent benefits of the material. This trend is supplemented by higher recycling rates.

The increasing supply and demand of PGMs, and their high value, have made recycling an integral part of the lifecycles. Recycling addresses supply risks and contributes to a greener and more resource-efficient economy. At the same time, the industry is ensuring the conservation of precious metals through efficient recycling processes.

PGMs are used rather than consumed and using the state-of-the-art recycling technology, up to 95% of the PGM content of spent automotive catalysts from end-of-life vehicles (and other PGM containing applications) can be recovered. Recycling is standard practice in common industrial applications such as catalyst gauzes and petroleum catalysts. However, in many cases the high technical recyclability of PGMs is jeopardized by insufficient collection and inappropriate pre-treatment of PGM bearing material.

Europe needs to improve its recycling schemes as economic and legislative drivers are significant: For example, in 2012 about 90% of the PGMs in US light duty scrap vehicle auto catalysts were recycled, while the average for the world as a whole is between 60% and 70%.

More information on Recycling of PGMs can be found here.