Agriculture relies heavily on the use of fertilizers to grow the crops that feed a growing world population. Nitric acid plays a prominent role as a key ingredient. Non-fertilizer uses include the production of: explosive-grade ammonium nitrate; adipic acid, for making nylon, and toluene diisocyanate, for manufacturing polyurethane.

Nitric acid is made in three stages. The first step is the oxidation of ammonia gas to form nitric oxide. In order to achieve high conversion efficiency, this is normally carried out at pressure over a platinum-rhodium catalyst. The nitric oxide is cooled and further oxidised to form nitrogen dioxide, which is then absorbed in water to nitric acid.

The production process of nitric acid however also generates nitrous oxide (N2O) as a by-product. N2O – commonly referred to as laughing gas – contributes to global warming over 300 times as badly as carbon dioxide (CO2).

N2O emissions in 2003 accounted for about 17 per cent of all greenhouse gas emissions from industrial sources in the European Union, according to European Environmental Agency statistics. Every year, around 1.2 million tons of N2O are released to the atmosphere by the acid producers. In relative terms, this is equal to the CO2 emitted by 80 million cars. 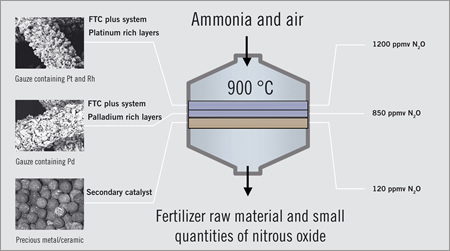 Innovative secondary catalysts using small amounts of PGMs reduce nitrous oxide emissions during the fertilizer production by up to 90 per cent. There are around 600 fertilizer plants worldwide, and all work on the same basic principle: Ammonia and air flow over platinum gauzes at 900 °C, where the gases break down and recombine to a certain extent, forming useful compounds such as nitric acid, from which the familiar nitrate fertilizers are later produced.

European authorities consider that N2O emissions from nitric acid plants can be reduced to a large extend at a relatively low cost. With innovative catalyst systems the biggest producers can drastically reduce their emissions of greenhouse gas. Reducing N2O emissions in the nitric acid industry will therefore help to fight the warming of our planet and offer the fertilizer industry the opportunity to contribute its bit to meeting environmental regulations and to guarantee our food supply in a more sustainable way.