Primary production of PGMs represents the transfer of metal from below ground resource to above ground material stock and should be regarded as an investment because the metal is usually available to be recovered for reuse in subsequent product life cycles with no deterioration in quality.

According to the U.S. Geological Survey, 95 per cent of the known world reserves of PGMs are located in South Africa. 58 per cent of world primary PGM production takes place in South Africa and Russia accounts for a further 26 per cent, most of this as a co-product of nickel mining. Nearly all of the rest comes from Zimbabwe, Canada, and the United States. Deposits in Russia and North America have high palladium contents while deposits in South Africa and Zimbabwe are richer in platinum. 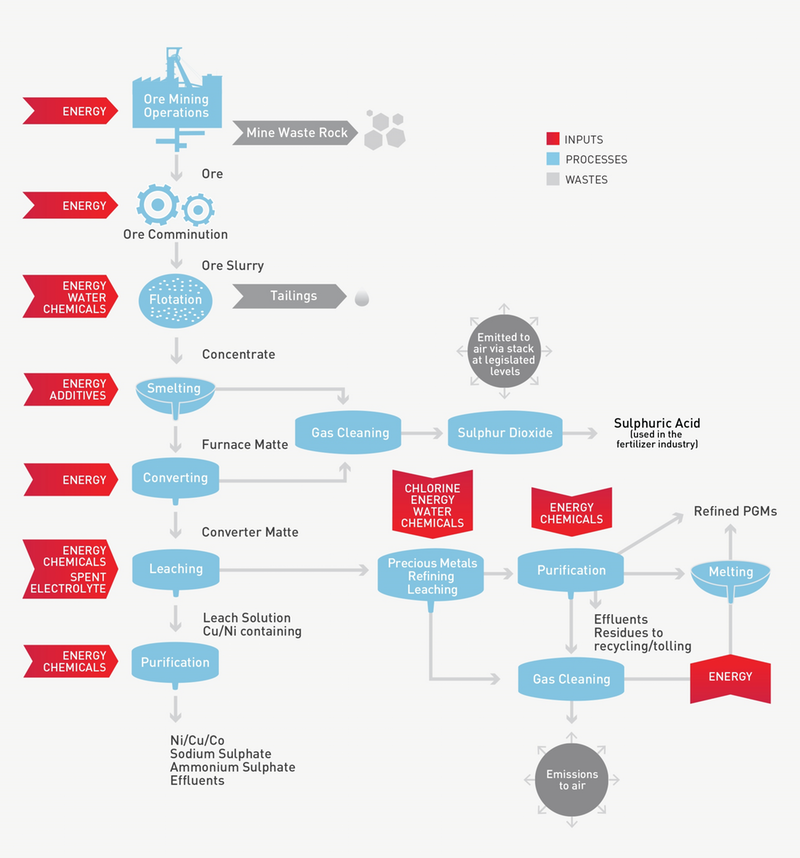 The extraction of natural resources and the manufacture of PGM products create large revenues and thereby contribute greatly to the economic growth and wealth of the countries where the metals are mined and processed.

Extraction, concentration and refining of PGMs require complex, costly and energy-intensive processes that may take up to six months to produce the final metal from the first time PGM-bearing ore is broken in a mine.

For example, in South Africa, PGM-bearing ores generally have a low PGM content of between 2 and 6 grams per tonne and it will typically take up to six months and between 10 and 40 tonnes of ore to produce one troy ounce of platinum (31,1035g).

PGM ore is mined underground and less usually in open-cast pits. It is blasted out of the ground; on surface, the ore is crushed and milled into fine particles. Wet chemical treatment known as froth flotation produces a concentrate which is dried and smelted in an electric furnace at temperatures over 1,500°C. A matte containing the valuable metals is transferred to converters to remove iron and sulphur. PGMs are then separated from the base metals nickel, copper and cobalt, refined to a high level of purity using a combination of solvent extraction, distillation and ion-exchange techniques.