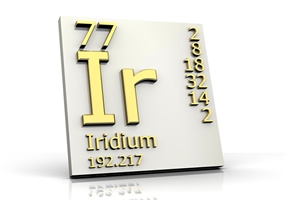 The rarest of the PGMs, iridium is second only to osmium as the densest element and is the most corrosion resistant known. It is white with a yellowish hue.

Although brittle, it is extremely hard (over four times that of platinum itself) and with its high melting point, temperature stability and corrosion resistance, is used in high-temperature equipment such as the crucibles used to grow crystals for laser technology.

Its biological compatibility is what we owe most to iridium as this enables it to be used in a range of medical and surgical applications. Iridium can be found in health technology combating cancer, Parkinson's disease, heart conditions and even deafness and blindness.

A shiny, oxidation-resistant metal, iridium also adds to the brilliance and durability of jewellery. It also has industrial applications such as the production of chlorine and caustic soda.

Having discovered platinum and palladium, William Hyde Wollaston handed over the remaining residues of ore to his commercial partner Smithson Tennant, a fellow Cambridge graduate with whom he had forged a partnership in 1800.

In 1804, Tennant isolated iridium (and osmium) from the residues and, due to its colourful compounds, named it after the Latin for rainbow, "iridis". Much of the credit for the discovery should also go to Frenchmen L.N. Vauquelin, A.F. de Fourcroy and H.V. Collet-Descotiles upon whose research Tennant also acted. Obtaining pure samples of iridium remained impossible, however, due to its high melting point, until 1842 when an American chemist called Hare used a hydrogen/oxygen flame to melt a small sample, allowing it to be separated from dross and other impurities.

It is still produced today from platinum ore and as a by-product of nickel mining. Iridium first found a use in the nibs of fountain pens, due to its extreme hardness.

In 1889, in Paris, a platinum-iridium alloy bar was cast as the standard unit length of the metre and remained as the definition for this distance until 1960 when more precise measurement methods replaced it. Many medical and surgical advances, such as pacemakers, have also relied upon iridium's unique qualities.

It is also worth noting that anomalous deposits of iridium can be found throughout the world at the 65 million year old interface between rocks of the cretaceous and tertiary eras. Such concentrations, thousands of times greater than that normally found in the Earth's crust, are believed to have arrived extra-terrestrially. Their presence is held up as evidence by supporters of the theory that a massive asteroid collision with our planet was the cause of the extinction of the dinosaurs at that same point in geological time.