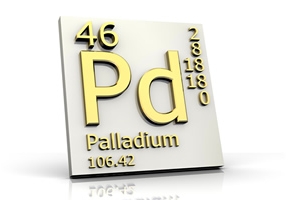 Like platinum, palladium has a natural white lustre. Although it has the lowest melting point of all platinum group metals (PGMs) and is also the least dense, palladium's remarkable qualities mean that it is no less crucial in a number of important applications.

Its melting point is still high compared with other popular metals (for example, over four and half times that of lead) and it has high temperature stability and corrosion resistance. Palladium is also a good oxidation catalyst, conductive, oxidation resistant and ductile when annealed.

But its most incredible property is the ability to absorb 900 times its own volume of hydrogen at room temperature. This makes palladium an efficient and safe hydrogen storage medium and purifier. It is also used in chemical processes that require hydrogen exchange between two reactants, such as that which produces butadiene and cyclohexane, the raw materials for synthetic rubber and nylon.

Palladium's catalytic qualities find it playing a key role in catalytic converters and air purification equipment. Its chemical stability and electrical conductivity make it a more effective and durable plating than gold in electronic components.

It took nearly two centuries for palladium's significance to be recognised - and the fight against global pollution owes a lot to this unique metal.

Following the perfection of his technique to obtain pure samples of platinum in 1801, William Hyde Wollaston went on to isolate palladium two years later by dissolving platinum ore in aqua regia (a mixture of hydrochloric and nitric acid). He named it after Pallas, the ancient Greek goddess of wisdom whose name had also been lent to the second asteroid ever discovered.

In an attempt to keep his techniques a secret, Wollaston offered samples of palladium for sale anonymously and his peers were cynical about the new metal's provenance, suspecting that it was an alloy of platinum. This forced him to publish details of his findings in 1805.

The use of palladium really took off in the 1970s when demand for catalytic converters - in which its remarkable properties play a key role - increased as automobile emission standards were introduced in the developed world. As these standards were tightened and applied globally in the 90s, demand for palladium expanded exponentially