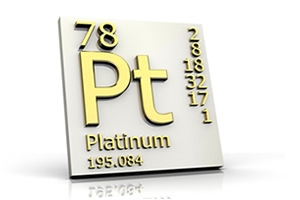 Platinum, with its natural white lustre, is probably best known for its use in jewellery. However, jewellery only represents about 40 per cent of the overall platinum use. Around 37 per cent are used for catalytic converters, with the remaining approximately 23 per cent being used in other industrial applications around the world.

Platinum and its relatives, iridium and osmium, are the most dense metals known to man (platinum is nearly twice as dense as lead and 11 per cent more dense than gold).

Platinum has a high melting point and temperature stability, a great corrosion resistance, and it is a good oxidation catalyst, conductive and oxidation resistant. Most amazingly, platinum in certain compounds can inhibit the growth of cancerous cell growth, and because it is biologically compatible it is an important component in many medical applications.

Platinum contributes to environmental protection in a number of ways. As already mentioned its efficiency as a catalyst is employed in motor cars, greatly reducing air pollution and greenhouse gases. It also makes a major contribution to waste reduction as its durability and strength mean that goods containing platinum are more reliable and longer-lasting than those containing non-PGM metals. Furthermore, the high recyclability of PGMs means they can be reused many times, which minimizes their load on the environment.

Pre-Columbian South American Indians are known to have found ways to use platinum for decorative purposes.

The first known example of platinum goes back to prehistoric times in South America - where a small head statue is known to have been shaped out of the metal. Awareness in Europe dates back to 1557 to a French-Italian scientist Julius Scaliger who was in Central America when large deposits of the metal were discovered in South America by the Conquistadors. It's from this discovery that platinum got its name, from platina - the Spanish word for "little silver".

However, it was not until samples began arriving in Europe in the middle of the 18th Century, that processes to melt and refine platinum were applied. In 1801, English physician William Hyde Wollaston obtained the first pure sample and his methods still form the basis of the techniques which produce platinum today.

Wollaston's discovery was an immediate commercial success and he and his collaborators went on to isolate other platinum group metals (PGMs). In 1824, the Ural Mountains were found to harbour significant platinum deposits and by the end of the 19th Century, a new jewellery style had developed combining the "new" metal with diamonds from recently discovered mines in South Africa.

In 1924 South Africa became a rich source of platinum itself when German geologist Hans Merensky discovered there the largest deposits ever found.

The Second World War brought great restrictions on the use of platinum as it was needed in armaments and it wasn't until late in the 20th Century that its popularity as a choice for jewellery returned.