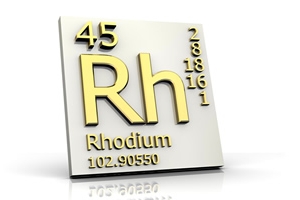 Rhodium has a cool-gray colour and is known to be extremely hard and corrosion resistant.

Like its sister metals platinum and palladium, rhodium also has excellent catalytic activity. Many complex chemical compounds have been developed for use as catalysts, especially in the organic chemicals industry. Rhodium-platinum gauzes are used in the production of nitric acid.

In vehicle exhaust emission control, catalysts containing rhodium are of major importance on account of their exceptional activity and selectivity. Today's three-way catalyst for gasoline engines uses rhodium to catalyse the reduction of nitrogen oxides to nitrogen.

The third platinum group metal to be discovered became a key factor in the fight against urban pollution. In 1804, William Hyde Wollaston took his discoveries further. From the chloride salts which remained after obtaining palladium from platinum, with aqua regia (a mixture of hydrochloric and nitric acid), he isolated a third distinct metal. By reduction with hydrogen gas, rhodium metal was obtained and named after the Greek for "rose" (rhodon) due to the pinkish hue of the salts.

Today, it is produced as a by-product of platinum mining and refining and of nickel mining in Ontario's copper-nickel sulfide region, Sudbury. Its catalytic qualities and strength were crucial to improving the converters' effectiveness.