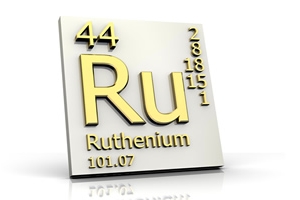 Pure ruthenium, a cool white metal, is rarely used by itself because it is extremely difficult to work. It remains hard and brittle even at temperatures as high as 1500°C. Ruthenium is, however, a useful addition to platinum and palladium to impart hardness in certain jewellery alloys and to improve resistance to abrasion in electrical contact surfaces.

Its principal application in the electronics sector is for use in resistors. Increasingly, ruthenium is also being used in computer hard discs to increase the density at which data is stored.

In the future, the use of ruthenium in alloys for aircraft turbine blades will help reduce the CO2 impact of air travel on the environment. If current prototypes are successful, their high melting points and high temperature stability will allow for higher temperatures and, therefore, a more efficient burning of aircraft fuel.

The last of the platinum group metals to be discovered has helped to improve the qualities and effectiveness of its relatives and other metals which improve our lives.

Named after the Latin for Russia, "Ruthenia", unsubstantiated reports of ruthenium's isolation had appeared in 1807 from the Polish chemist Andrzej Sniadecki who had christened it vestium.

It was given its final name in 1827 when Jöns Jacob Berzelius and Gottfried Osann examined the remains of platinum ore from the Ural mountains that was insoluble in aqua regia (a mixture of hydrochloric and nitric acid) and identified ruthenium oxide.

In 1844, Russian professor Karl Karlovich Klaus, obtained a pure sample from this oxide and ruthenium became the last of the platinum group metals (PGMs) to be isolated. The Urals are still a source of ruthenium and it is also found in North and South America and South Africa.

Today, ruthenium is used primarily as a hardener for platinum and palladium and has a remarkable effect on titanium whose corrosion resistance is boosted a hundred times by the addition of just 0.1 per cent of ruthenium.